“The queen gave her a golden flask of suppling olive oil for her and her maids to smooth on after bathing”
Homer, The Odyssey 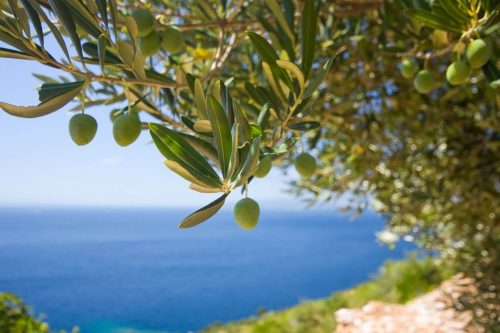 Athena, the Goddess of War and Wisdom, was believed by the ancient Greeks to be the creator of the olive tree. After the completion of a new city, Athena and Poseidon, who was the God of the Sea and Earthquakes and Horses, competed to become the city’s protector. Each presented their version of ‘the greatest gift’; Poseidon used his power to create a salt water spring while Athena bestowed upon the people of the city the first olive tree. The city was named Athens in her honour and it is said that every olive tree in the city is descended from the original gift, created by Athena’s own hand.

To the ancient Greeks, olive oil possessed divine powers and so small bottles would be given as gifts as a symbol of their civilisation. Olive oil is said to have powerful rejuvenating and healing properties. Olive oil is abundant in natural vitamins and antioxidants that provide its velvety, moisturising properties.

For centuries olive oil has been used to treat ailments of the skin and Hippocrates himself called it the ‘great healer’. Like the civilisations of old, here at Living Pure Natural we appreciate the unique properties olive oil possesses. Why not worship your skin with the power of olive oil in our Timeless Deep Hydration Night Cream and Eternal Oil Collection for face.

This website uses cookies to improve your experience while you navigate through the website. Out of these cookies, the cookies that are categorized as necessary are stored on your browser as they are essential for the working of basic functionalities of the website. We also use third-party cookies that help us analyze and understand how you use this website. These cookies will be stored in your browser only with your consent. You also have the option to opt-out of these cookies. But opting out of some of these cookies may have an effect on your browsing experience.
Necessary Always Enabled
Necessary cookies are absolutely essential for the website to function properly. This category only includes cookies that ensures basic functionalities and security features of the website. These cookies do not store any personal information.
Non-necessary
Any cookies that may not be particularly necessary for the website to function and is used specifically to collect user personal data via analytics, ads, other embedded contents are termed as non-necessary cookies. It is mandatory to procure user consent prior to running these cookies on your website.
SAVE & ACCEPT